Job growth anemic for IT professionals

Outsourcing, cloud computing and other managed services still a factor in the country's loss of technology-related jobs; many insurers running flat.

Job growth anemic for IT professionalsAn analysis of the February 2011 U.S. Department of Labor National Employment Report shows a net gain of only 2,600 seasonally adjusted jobs in the IT sector.

For the insurance industry, the exception may be in Liberty Mutual's announcement that it is creating 100 IT jobs. In October 2010, Liberty Mutual broke ground on a 22-story, 590,000 square-foot office building in Boston as the company expands its global headquarters. Now, it announced a new Information Technology Development Center that will be housed at the headquarters and is looking for employees to join the operation.

The insurer is seeking software developers, project managers and architects to round out its new headquarters. But many other insurers are running flat IT organizations, instead putting resources into business development efforts, specifically to open additional agencies. This coincides with a report issued late last year by Robert Half Technology. In its "IT Hiring Index and Skills Report," the firm said 89% of CIOs plan to maintain current IT personnel levels.

Based on the U.S. Labor data and Janco interviews, Janco CEO Victor Janulaitis said they predict there will be more churn in IT staff as CIOs accelerate their move to more flexible staffing models.

"CIOs are outsourcing more technical work, including managed IP services such as VoIP and VPNs," he said. "They are hiring more contractors for desktop and security services, and they are putting more applications such as remote backup in the cloud. At the same time, they are looking to hire IT people with business and analytical skills, such as risk management and project management."

Janco has found that despite recent economic reports that show jobless claims have been down for several consecutive weeks, employees reveal mixed feelings about what is in store at their employer, for the overall job market and for their pay check in the year ahead, according to the fourth-quarter employment confidence survey of 2,118 U.S. adults.

The jobs report highlighted where the pain is the greatest: "The data for the IT sector shows continued stress in telecommunications with a loss of 43,700 jobs in the past twelve months which is countered with a growth of 48,500 jobs in computer system design and related services." Janulaitis added, "The overall growth of the 7,300 jobs is not enough to cover the recent college graduates and does not bode well for the Class of 2011."

Further, recent research results from an IBM customer user group SHARE and Unisphere Research, "Closing the IT Skills Gap," notes that IT hires are not sufficiently prepared to perform jobs within their companies, and 44% respondents of the study said, at a minimum, there are noticeable gaps in their skills.

Janco has found that despite recent economic reports that show jobless claims have been down for several consecutive weeks, employees reveal mixed feelings about what is in store at their employer, for the overall job market and for their pay check in the year ahead, according to the fourth-quarter employment confidence survey of 2,118 U.S. adults.

The tables below show the net chage in the number of jobs and the total IT Job Market. 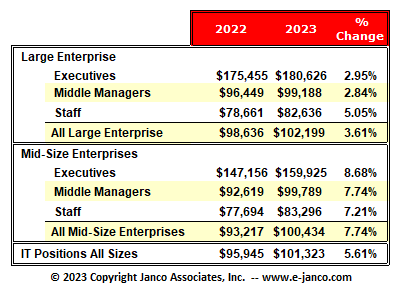